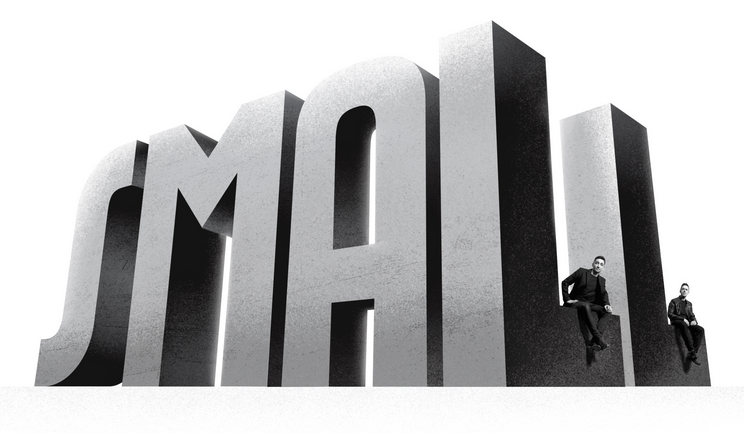 We interviewed Luca Lorenzini, co-Founder & Executive Creative Director, together with Luca Pannese of SMALL agency, founded in New York in 2019. Two years later, SMALL agency created ‘The Hiring Chain‘ for CoorDown, aiming to encourage companies around the world to hire people with Down syndrome. The video won 31 awards (at Cannes Lions, Eurobest, D&Ad, ADCI, ADCE, ADC, LIA, Cresta Awards, New York Festivals, Shark Awards, Epica) and communicates the power of representation and visualizes the positive impact that can result from seeing people with Down syndrome at work. The soundtrack is an original song performed by Sting inspired by children’s nursery rhymes, it is easy to memorize, and composed by the Stabbiolo Music team.

Elena Grinta: The first topic I would like to discuss with you relates to the existing dialectic between profit and purpose. On the one hand, you have companies that advocate for the idea of ‘profit over all’ while their purpose only seems to matter at the time their reputation demands it. In these companies, it is difficult to change the narrative and the DNA of their business model. However, on the other hand, you have companies that believe in the balance of the infamous three P’s (people, planet, purpose) in a new economy model. I am curious to know which perspective you share, and how you and your agency added new value to building a balance between these three P’s.

Luca Lorenzini: In this discussion, there are various business approaches and several types of communication. There are those who avoid this ‘new wave’ and focus exclusively on the products/services they offer, but you also have people who actively try to connect the two and pursue a kind of purpose-driven communication. Finally, there are NGOs that have been purpose-driven since the very beginning: this central perspective is the most interesting one at the current moment.

Purpose-driven communication can either be done well or rather poorly, what makes the difference is what is behind the message they are trying to communicate. For instance, in the advertising world, someone might be excellent at storytelling and does so in the most exciting way possible. However, truly important is the question of whether what they are promoting, corresponds with their business reality. Unfortunately today, many brands seem to simply jump on the “sustainability train”, but fail to make decisions that express these beliefs. In this case, the communication is not only meaningless, but it is counterproductive as well.

The brand Gillette once enhanced the promotion of toxic masculinity, which resulted in a large amount of criticism. The question that came to light was: if Gillette desires to have gender equality, why does it sell razors for women at a much higher price than razors for men, considering they are produced in a similar way? This is just one small example, but there are many others, especially in the climate change sphere. Here the issue is the same when what they are saying does not align with what they are actually doing.

Elena Grinta: True, the Gillette case caused quite a stir; sometimes these ‘inconsistencies’ cost companies greatly. Would you say that companies should be obliged to state their purpose? Have you ever experienced cases in which you advised your client, at a strategic level, not to carry out a purpose-driven campaign?

Luca Lorenzini: It happens quite often. Exhibiting oneself as a brand is currently the rule rather than the exception, while communication focuses on the opposite end, which is to speak to people when nobody else does to avoid the risk of being overshadowed. Ultimately, this is nothing more than a shortcut for most companies, as communication alone cannot be an act of change, it must always be supported by actions.

For the past nine years, we have been working with CoorDown. This is an association that advocates for the rights of people with Down syndrome. In our commercial, these people are treated like anybody else and are fully incorporated into the larger narrative, which has the potential to educate people about inclusiveness.

Like I said before, apart from a few exceptions, communication by itself is rarely resulting in an actual act of change. For instance, during the COVID pandemic, there were two types of different business approaches that were observed. On the one hand, some brands created commercials that advocated for notions of unity and closeness in difficult times: “all together we will make it”. While on the other hand, you had companies that focused on concrete and tangible initiatives, such as making donations to hospitals. It was a very difficult and complex situation where many words were often useless and rhetorical. This shows how silence is sometimes better when you really have nothing to contribute to the actual conversation.

Elena Grinta: From a communications professional standpoint of view, I would say that this is a very strong message, it also makes me think of other questions. When you make a creative type of proposal to the client, do you also have KPIs on the proposal itself, and how much would this type of communication impact the cause brought forward? That is, how much does this message actually impact the behavior of the client-citizen?

Luca Lorenzini: I don’t think that any type of communication by itself has the ability to change things, certainly, more ‘pieces’ of communication can help create a certain type of culture. For example, there is a major issue of diversity and inclusion in the United States, that includes various types of ethnicities, religions, and sexual orientations. Of course, one brand will not make a long-term impact on these issues. However, when more and more brands start to represent and communicate these topics, a more ethical universe is formed that could cause a chain reaction and slowly change the way things are seen. The ultimate goal of advertising is to sell products and goods, that is clear, but at the same time, it could play a key role in initiating positive changes that change the way people behave. Communication now is becoming increasingly more focused on purpose-driven models, as young people – today’s consumers – are much more attentive to these issues than my generation. Companies are being placed under a magnifying lens as these consumers are demanding that brands pay closer attention to these issues. With respect to your question about KPIs, we have never done that, but I think it is very interesting. Unfortunately, it is rarely the case that clients we get to work with genuinely want to change the world, except for nonprofits.

Elena Grinta: One of the commitments of the Manifesto of Communication For Good is impact. Agencies can help with spreading a culture by measuring external impact. They can push companies to internalize ‘ad hoc metrics’ and thus obtain an additional element to build a solid reputation. But, how does an agency provide concrete answers and work on brand consistency?

Luca Lorenzini: We rely a lot on the genuine intentions of the client himself. For example, when we are asked to advise on purpose-driven communication we always ask the question: are you sure you can say that? Are you really wanting to do something that supports sustainability? It is in the client’s favor to answer truthfully as the agency is better protected than the client in any case of an indictment. Therefore, the brand itself has to pay close attention to the difference between the message it wants to convey versus what it actually does. All we can do is ‘question’ the client, deeper than that we cannot go. It is not even our role, we simply have to trust.

Elena Grinta: What you say is very interesting and reminds me of the Marini agency’s advertisement for tuna (a nominee for the last Communication For Good Award). The company in that case was accused of not matching its message to its truth, and the agency also got caught in the middle.

Luca Lorenzini: I completely understand what you are saying, but it is impossible for the agency to have in-depth verification. We really tend to rely on the good faith of the client.

Elena Grinta: Absolutely, I mentioned it to you as an example. Because it is actually one of the first times that the agency became involved, which shows how increasingly complex the communication landscape is becoming. Perhaps something is changing.

Our mission is to monitor Advertising to make certain that companies obey ethical standards of trustworthiness and transparency while communicating their commitment to addressing the great challenges of the New Millennium. From climate emergency to social inequality through all the issues included in the Sustainable Development Goals Agenda, we monitor the consistency of their statements, if they are ‘walking the talk’. With rising misinformation and commercial ownership, independent information is more and more rare. We think citizens deserve access to accurate analyses with integrity at their heart, so we can all make critical decisions about our lives, health and enviroment – based on fact, not fiction.
Our editorial independence means our content agenda is set only to voice our opinions, supported by in-depth research, free from any political and commercial bias, never influenced by interested owners or shareholders (which we don’t have). It means we can stand up to mainstream and give a voice to those less heard. We hope this will motivate you to make a contribution in support of our open, independent journalism. Every reader contribution, however big or small, is so valuable. Support BeIntelligent from as little as €5 – and it only takes a minute. Thank you.