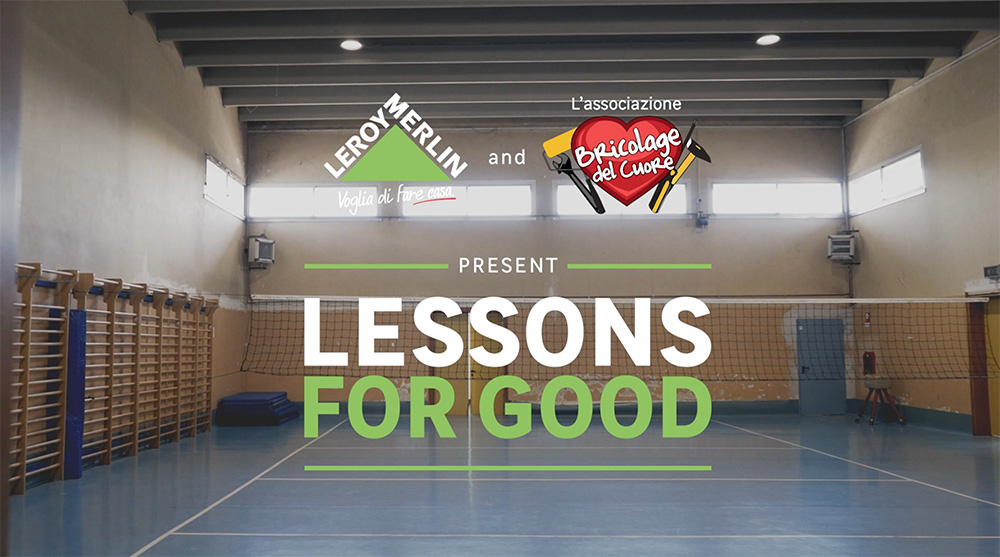 Leroy Merlin wins the First Prize for Communication For Good

Promoted by BeIntelligent in collaboration with Oltrelamedia, to enhance corporate social and environment...
Read More

Leroy Merlin wins the First Prize for Communication For Good

Promoted by BeIntelligent in collaboration with Oltrelamedia, to enhance corporate social and environmental responsibility, the For Good Communication award is part of the Masterplan of EG Media, Beintelligent Editor, since 2018 committed to promoting For Good Communication Leroy Merlin wins the For Good Communication award, created to bring the attention of all stakeholders towards the role the advertising industry and, more generally, the private sector can play in the creation of a common good. Elena Grinta (EG Media SB Founder): “The idea was born to create something new that was perceived not so much for its innovation as for its impact, for its ability to make people think. The goal is to question certain negative preconceptions that one has towards the industry and within the Advertising industry. We are convinced that communication can be instrumental to the common good and positive transformation and we hope that this is only the beginning of a long series of activities that we will organize together with others - perhaps starting from the jurors and members who have participated in this first edition - because we believe in the central role that the advertising industry and the private sector can play in achieving ambitious goals such as those of the 2030 Agenda. " To support the work of the jurors, a unique and absolute novelty: the automated system developed by EG Media SB, publisher of BeIntelligent, together with the Politecnico di Milano and the Consortium for the C2T Technology Transfer, to verify the reliability of the communication initiated by the relative brands sustainability and corporate responsibility, which made it possible to support the reliability of the results, at least from the point of view of the solidity of the actions undertaken by the companies and communicated through the registered campaigns . The tool had the dual purpose of resolving - if needed - any internal conflict within the jury, to support it in the decision of the winner, or to support a very clear choice also from a 'scientific' point of view, as it was for Lesson For Good, a project by Leroy Merlin which was awarded the Prize. Elena Grinta: “I am happy that there was unanimity and agreement on the first classified. This means that although other campaigns have garnered the favor of the jurors with respect to the execution both from the point of view of storytelling and from the aesthetic point of view, however all have focused attention on the role that the campaign has had in terms of social impact. . The absence of divergence of opinions helped in the finalization of the award, but the Analysis tool - developed with data mining and natural language processing techniques- was useful to comfort the choice of the jurors. From the analysis of the articles that we have been able to collect from 2017 to date, Leroy Merlin's ability to be recognized externally for the theme 'adequate housing' - one of the main topics monitored by our innovative solution which is specialized in the People, Planet, and Policies framework - proving to be able to create a positive interaction between the CSR initiatives that the company has been implementing for years, the communication activities and the perception of journalists, associations, NGOs. What I have been able to see is that this campaign - compared to others registered for the Award - is not a standing alone campaign, designed only for a particular event, indeed, it has its own historicity. This shows that when the company engages with a cause, what is important is that the commitment is protracted over time, and the results are monitored ” Figura 1 Risultati dell'Analisi Di EG Media SB su Leroy Merlin - vincitore del Premio Comunicazione che fa Bene For Good Communication award Jury The Award Jury was a novelty in the panorama of advertising awards, having been selected to represent the various stakeholders at 360 °: from the private sector to the creative industry, from consumers to journalists, with a particular attention to the world of activism. A jury with a heterogeneous composition, not necessarily of 'experts', with the aim of giving space to different points of view, experiences and professionalism. The excellence of the profiles of the participants in this Jury does nothing but underline the importance of an initiative whose goal, it must be stressed, is to bring to the attention of all the crucial role of the advertising industry in facing the challenges of “Sustainable Development” (SDGs 2030), putting the spotlight on those projects that have chosen to use creative resources to improve the world we live in and help ensure a sustainable future for all. The following took part in the First Edition of the Communication that does Bene Award as Jurors: Andrea Di Stefano, Director of the monthly Valori.it, Andrea Farinet, President of the Fondazione Pubblicità Progresso, Patrizia Gilberti, Head of External Relations UPA, Luca Lorenzini, Co -founder & Executive Creative Director SMALL New York, Laura Pulcini, Vice-president ADOC - Ass. for the defense and consumer orientation, Celeste Righi Ricco, Co-Founder and Public Relations Manager at Change For Planet, Marina Spadafora, Sustainability consultant and National Coordinator by Fashion Revolution Italy. The For Good Communication award celebrates AD campaigns proving - more than the others - to have a lasting and measurable impact over time and has been able to raise public awareness by generating a positive change in the habits of citizens and workers - showing adherence to the principles described in the Manifesto for Communication that does Bene promoted by BeIntelligent.